Triple Chocolate Brownies for my lovely friend Amy’s birthday because all girls like chocolate.

This is one of my favourite recipes and everybody loves them because they are chocolatey and gooey and then when you bite into the brownie you get chunk of white chocolate.  Mmmmmmhhh………………

The recipe I use is not quick as you need to melt the chocolate let it cool and whisk the ingredients for a long time as well as baking for 40 minutes and then I leave them over night so they become gooier.

I had thought about making fudge but went for the brownies.  When I told Amy it was choice between fudge and brownies she said no, chocolate brownies definitely. 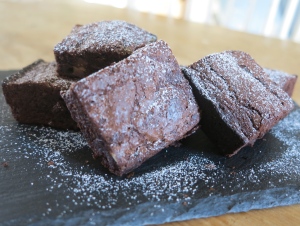 Saturday was Abergavenny food festival where there are many lovely stalls selling lots of lovely food.  As my Mam has a shop in Abergavenny I asked her if I was allowed a stall outside her shop selling some of my bakes.

Mam said yes and I decided to have a Brownie stall.

I then had to figure out what type of Brownies I would bake and also make sure that I would have enough to sell.  I also had to think about keeping them fresh which meant i could not cook them too soon before the food fest.

I started baking last Tuesday and made four batches every night after school (I managed to drop one batch that had to be thrown away).  On Friday I didnt feel very well so I couldnt make anything.  There was a chance I wouldn’t be well enough to sell all my brownies, which would have meant all my work would have gone to waste.

Mam said she would get everything ready for Saturday so that if I was well enough I would at least be ready to sell all my baking.

On Saturday I felt a lot better and ready to sell my bake.

On my stall I had four diffrent types of brownies which were:

We went into work early and by 10 o,clock my stall was ready and I was all set up to sell.  I didnt stop until about 3 o,clock when I had nine brownies left.  I was so tired and just wanted to pack up but then a lady came and bought eight brownies and saw the the last brownie on the tray and asked if that was the last one.  I said yes so she bought it. 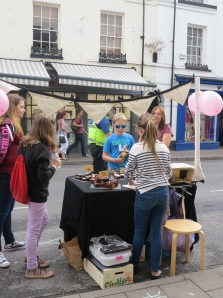 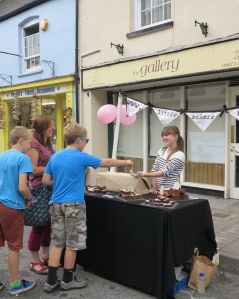