On the second bake of a Welsh Christmas I made a Christmas Bara Brith.

Bara Brith takes two days to make as the fruit is soaked in black tea and brandy for a day.  Once the fruit has been soaked,  flour, mixed spice and egg is added to the fruit and then put into to a bread tin and then baked in the oven for 90minutes.  The Bara Brith is cooked when a skewer is inserted in the middle of the Bara Brith and if it comes out clean it is ready to come out of the oven.

Soak the fruits in a bowl overnight with the black tea and brandy.  When the fruit has been soaked add the sieved flour, brown sugar, mixed spice and egg to the fruits.  If your mixture is slightly hard to mix add a bit more tea.  When the mixture has been mixed together place in a lined loaf tin and bake in the oven for 90 minutes.

History says that bBara Brith was the last loaf put into  the oven at the end of the weekly bake, adding the fruit to the bread dough made it taste nicer

Ive decided to do twelve bakes of christmas and to add a little twist (as I’m Welsh) they are going to be based on Welsh recipes so between now and Christmas my baking theme will be the twelve bakes of a Welsh Christmas.

This is an old recipe and you have work out some of the funny instructions like stone the raisins.  We don’t have stones in raisins anymore and the candied peel is sliced so I didn’t have to slice it as the recipe said.

It is usual to make the pudding before Christmas so that the pudding has time to  age which means the flavours taste better.

Once all the ingredients have been mixed together they are placed in a bowl a and covered with grease proof paper and tin foil to stop the water getting into the pudding when they are being steamed.  Mrs Beeton’s recipe said to cover the puddings with a floured cloth but I think thats because tin foil was not available or it was very expensive item to buy.

This was a fun bake although it was hard work as you have to keep an eye on the pudding while it is steaming and five hours is a long time.

It is traditional to put a small coin in the pudding mixture and the lucky person who gets the coin will get good luck for the year.

This week I decided to make truffles.

I made these because I liked the ganache I used in my bake last week and that is exactly what a truffle is made from.

I made two types of truffles, chocolate truffles rolled in coco powder and Oreo truffles made from crushed Oreo’s and cream cheese mixed together, then shaped into a ball and when cooled they are then covered in melted chocolate and left to set.

To make a ganache heat double cream until it is hot but not boiling. Then pour the cream over the prepared finely chopped chocolate.  Stir up the mixture until it is  fully combined then place in the fridge to set.  You must make sure it hasn’t set too hard as you need be able to be roll the ganache into balls without it melting in your hands.  This can sometimes take up to a day to set.

When the ganache is ready roll them into small balls and then cover each ball in coco powder.

When you’ve finished keep them in the fridge to store that is if you didn’t eat them all like I nearly did!

Butter is sometimes added to the ganache to give it a shiny finish.

Next week I’m going to start my twelve bakes of Christmas.

As I did my fiftieth blog last week and it is also my aunty’s birthday today I decided to celebrate by doing a showstopper cake from Mary Berry’s Showstoppers cook book.  I have chosen to do a chocolate chequered ganache cake.  Mary Berry says and it says it is not as difficult as it looks.

Making the cake was not the hardest bit but getting the chocolate swirls that went on top of the cake was really hard.  My first attempt ended up with no swirls and big blob of chocolate on the work surface.  After I cleaned up my first mess I then tried again and this time I got got some great twirls.

I really enjoyed this bake and the best bit was when my aunty cut into the cake and saw the checks. 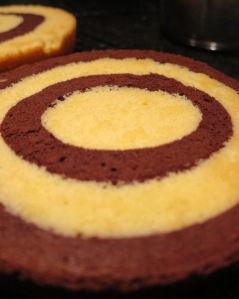