This week i made focaccia bread. I enjoyed doing this bake although i did have to prove the bread a lot.

First you make the dough and then roll it out on a oiled surface. Then you put a tea towel over it and leave it to prove for and hour.

Once the hour is up make it into a ball and knead it for 5 – 10 minutes and then leave to prove for another hour.

Then split the dough into two and let it prove for an hour in a bag.Once that is done prood it all over with you’re finger and then sprinkle with salt, pepper and Thyme over it.

Then put it in a oven for 15 minutes and it its cooked.

If you dunk olive oil in it it is so good.

Did you know:- Focaccia is a flat oven baked italian bread and the texture is similar to a pizza dough.

People sometimes use the dough for pizza and some people make sandwiches out of focaccia bread. 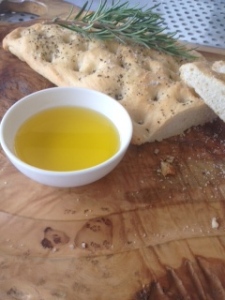