This week my bake was welsh cakes also known in Wales as Pice ar y Maen which means means cakes on the stone.

I did this bake because it was Saint Davids day and I thought I would do a welsh bake!

I found this bake quite easy but I did struggle on baking them but I know now next time to turn my temperature down so that the bottom does not bake so quickly and it gives the middle a chance to bake and not stay like a biscuit dough.

The Welsh cakes dough is a biscuit dough but also like a scone mix. 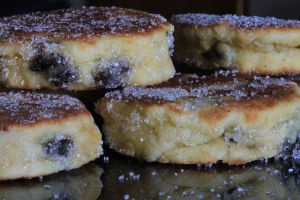 The baking of welsh cakes began in farmhouse kitchen to go with a cup of tea.  They would baked in small batches on a bake stone over the fire.  Once they were baked they would taken the Welsh to the local farm shops for people to try. Everybody loved them.

Older recipes would use half lard and half butter but today we just use butter.