This weeks bake was Brioche and they weren’t as hard to make as I thought they would be. This bake was one of my favourites and I will defiantley make them again.

The dough is made the night before and left in the fridge to rise.  The next morning I divided the dough into 16 equal pieces and then took a small piece of each of the 16 pieces which I then used to make the bobble on top of the roll.

Once all shaped up the dough is then placed into moulds.  Never having made brioches before I had to buy some moulds to add to my baking tin collection!  I’m don’t really like silicone bakeware but that was all I could find that didn’t cost too much money and would get to here in time for my bake and they turned out to be very nice moulds.

Did you Know:- Brioche comes from France and is often thought of as being a pastry but it is really a bread.  It is the butter and eggs that make it light and flaky and probably why it is confused as a pastry.

The saying “To Make A Brioche” means make a mistake ‘to drop a brick’.  The saying came about when musicians of  the Paris Opera decided to punish members of the orchestra who played out of tune by making them pay a fine. The fines were then spent on brioches which were eaten by all of the orchestra at a later date. The musicians who were fined had to wear a badge representing a brioche in their button holes. Eventually word got around of this tradition and the expression ‘to make a brioche’ came about when someone wanted to say that someone had acted foolishly or made a silly mistake.” 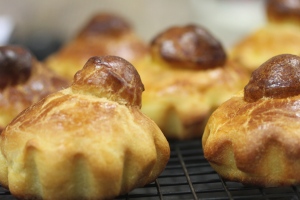